It starts with them sitting next to each other at dinner, then holding hands during a movie.

Soon there’s a new couple in assisted living. Cathy Gustafson has seen it happen many times at The Highlands in Topsham.

“It’s a beautiful thing to see,” said Gustafson, the retirement community’s director of assisted living. “We definitely embrace it.”

But not everyone does. From gossiping residents to resentful family members, many challenges can stand in the way of couples who bond in assisted-living facilities, said Candace Kemp, a sociology professor at Georgia State University’s Gerontology Institute.

Among them is the lack of privacy, which can make it hard for a couple to get to know each other – let alone get intimate – without everyone prying into their business.

Still, the benefits they enjoy outweigh the aggravations, by improving their well-being and giving them a better life.

“Having that intimate relationship is so meaningful,” said Kemp. “It provides companionship. It provides support.”

Kemp, who recently researched social relationships in assisted living, said most residents don’t get into new romantic relationships, but couples had formed in all nine of the facilities in her study.

“For the couples to start dating, it’s challenging because it’s a communal environment, so there’s not a whole lot of privacy,” she said.

Unlike spouses living together in the facilities, Kemp said, new couples can become fodder for the gossip of fellow residents. “It’s variable, though, in terms of how other residents respond to it.”

Those who keep more to themselves, spending their time together watching television in one of their rooms, going on a walk or sitting on the porch, are subject to less scrutiny.

The more overt couples who do everything together, from eating meals to attending activities, tend to draw more attention.

“There can be, sometimes, some jealousy,” said Kemp.

That’s not surprising considering the gender imbalance in assisted living – a result of the discrepancy in life expectancy between the sexes.

There’s often an abundance of single women who have outlived their husbands, and The Highlands, which is two-thirds female, is no exception.

Gustafson said there are a lot of questions of the staff when a new man is moving into the facilty.

“The ladies are funny,” she said.

If a new relationship does form, she said, the staff informs the family. In Gustafson’s experience, “they’re 100 percent supportive,” she said. That includes living spouses whose husbands or wives have found a new girlfriend or boyfriend in the memory loss unit – the most fertile ground for new couples, Gustafson said.

Gustafson said there are no rules against it at The Highlands, as long as the family is aware.

For other residents in assisted living, the biggest challenge is making sure they have privacy.

“When staff comes to check on residents, they’ve sometimes walked in on things,” Kemp said. “They’re supposed to knock but even if they do that, people may not hear.”

Another concern about sex in assisted-living facilities – the spread of sexually transmitted diseases – has grabbed headlines in recent years, but doesn’t appear to be a problem in Maine.

National figures showed the increase in the incidence of chlamydia, from 2008-12, was greater among people 54 and over than the population as a whole, but there was no trend among that age group in Maine.

The advent of Viagra, the lack of concern about pregnancy and even the difficulty of opening a condom package with arthritis all contribute to risky sexual behavior among the elderly, said Dr. Jabbar Fazeli, a Portland geriatrician.

He said elderly people also are less likely to report STD symptoms to their doctors, who tend not to ask.

“You’re too busy discussing their stent and their heart disease and their colonoscopy,” Fazeli said.

Kemp said there’s a misconception that sexual and emotional intimacy become less important to people as they age.

“But those needs continue,” she said.

Gustafson and her staff recognize that.

There’s currently only one couple at The Highlands who met in assisted living there, she said. Both lost their spouses years ago.

They have dinner together every night and talk about the old days.

“Both of them are more vibrant because of it,” Gustafson said. 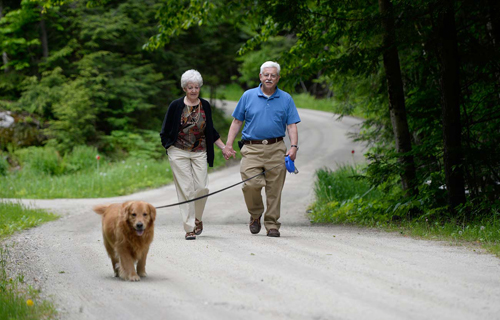 Across Maine and the nation, a higher percentage of people are embarking on their old age unmarried. But many, like Doug Johnson and Flo Rich of Harpswell, are taking a fresh look at love, and walking into the future together.