Volunteers Dick and Carol Ogden of Shapleigh make it easy for hungry seniors in York County 'to get help with dignity.' 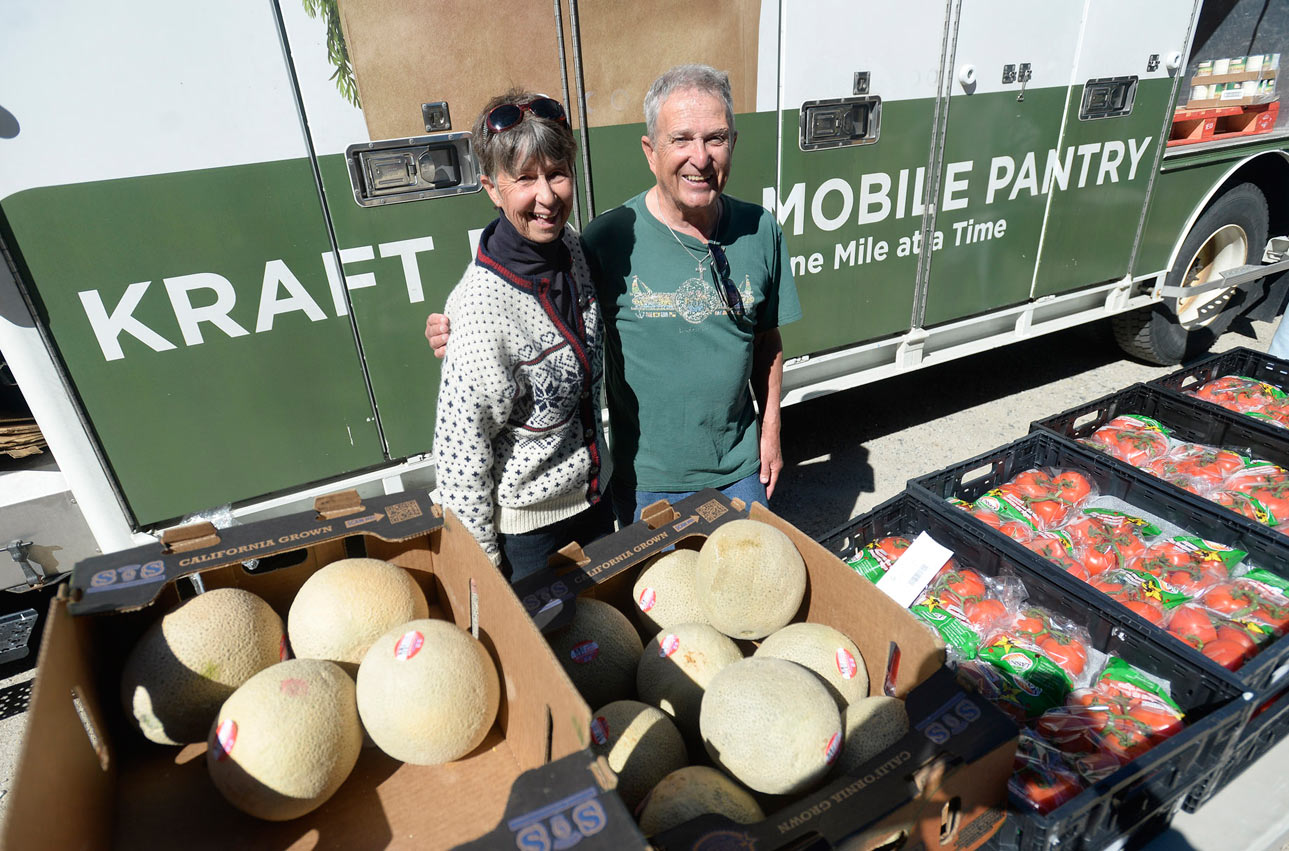 LFRED — Dick Ogden walks quickly around the quiet grounds of the York County Shelter Programs, a clipboard in one hand and cup of coffee in the other.

The sun has barely risen over the apple orchards behind him as he greets volunteers, directs traffic and prepares for an intense few hours of feeding some of the county’s most vulnerable residents.

It is still more than two hours until a truck loaded with food will show up for a seniors-only giveaway, but already a dozen cars are parked in line. Each family will leave with a box of food, including fresh produce and frozen meat.

“We don’t open until 10 and these folks are already here. It just isn’t right,” says Ogden, 75. “Nobody waits in line that long for food unless they’re hungry. If there’s a manifestation of hunger in seniors in Maine, this is it.” 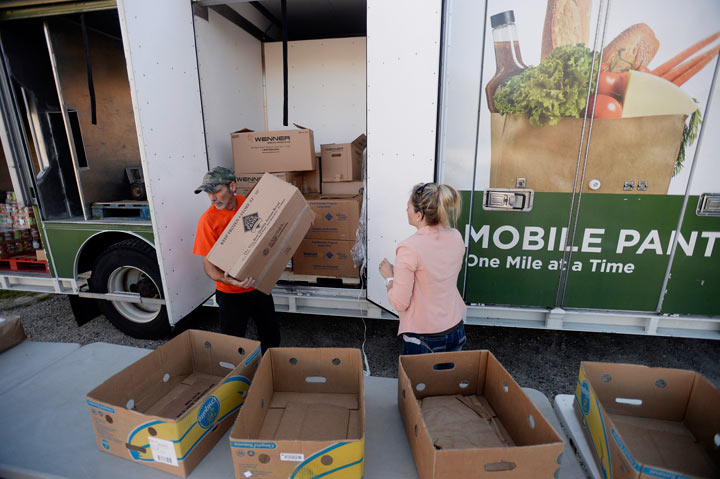 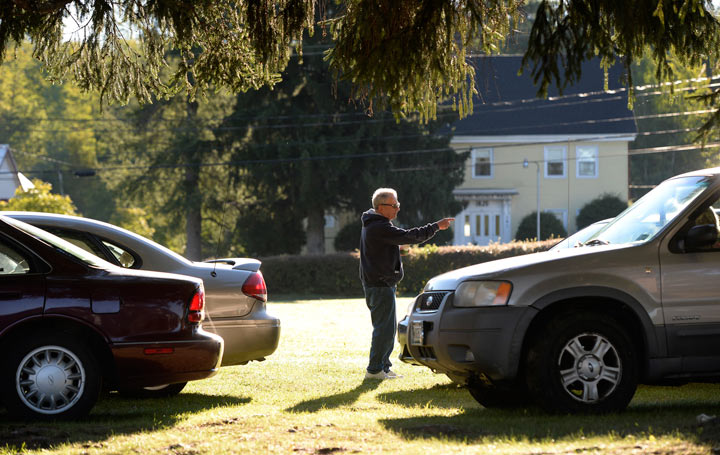 As organizers, Dick Ogden and his wife, Carol, are always among the first to arrive for the monthly Good Shepherd Food Bank Senior Food Mobile event in Alfred, but they never beat the first few seniors.

The Ogdens, who are retired and moved to Shapleigh six years ago from Massachusetts, have spent the last year organizing the foodmobile distributions in Alfred and say the level of need is tremendous and unforgettable.

They saw the need firsthand when they began volunteering at the food pantry in Alfred. She says they felt moved to volunteer when they dropped off donations.

“We’ve both had very good lives and to all of a sudden be exposed to folks who really didn’t and were trying to do the right thing and get by really brought me into searching for ways to give back,” Carol Ogden says.

That path led them to volunteer at the food pantry – often buying food with their own money – and then to organizing two York County programs. They are in charge of distribution for the Community Supplemental Food Program, which provides 30 pounds of food to 307 low-income seniors each month. 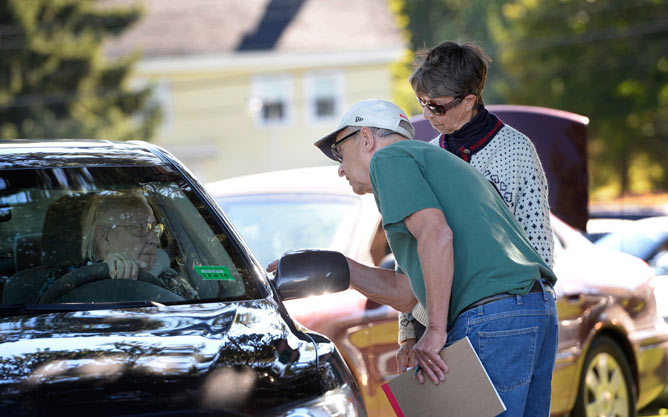 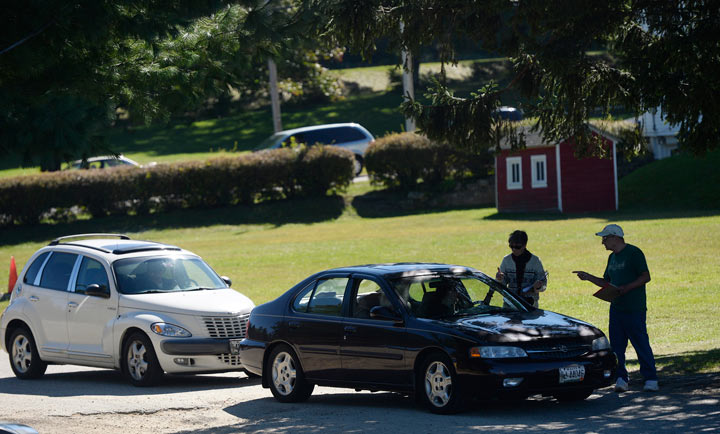 In addition, for much of the past year, the Ogdens also have been organizing the monthly foodmobile distributions, funded by a grant from Kennebunk Savings Bank. In October, 237 boxes of food – one per family – were sent home with seniors.

Under the Ogdens’ supervision, both the supplemental food program and foodmobile distributions run smoothly and with as little inconvenience for seniors as possible. Volunteers, many of them residents of the shelter, fill food boxes and load them into the cars so the seniors don’t have to get out.

Kristine Jenkins, coordinating director of Partners for a Hunger-Free York County, is amazed at how seamlessly the Ogdens distribute food and how passionate they are about helping their neighbors.

“The biggest impact they have is that they care about the people they’re working with. Many of these seniors feel isolated and like nobody cares,” she said. “The Ogdens show them that someone knows they’re there. It’s a hard position to be in to ask for help like that, especially for senior citizens. The Ogdens make it easy for them to get help with dignity.”

Carol Ogden, 72, says they can’t help but feel connected to the seniors they meet, some of whom share their most guarded secrets about living in poverty. Sometimes they get phone calls from people at their lowest moments, desperate for help and knowing the Ogdens will point them to it.

Other times, the seniors show up with thank-you cards and small Christmas gifts. On cold mornings, warm cups of coffee will be pressed into their hands by seniors who can’t really afford the extra cost, Dick Ogden says.

“They’re free with their stories and I’m very free with my hugs,” Carol Ogden says.

When the foodmobile – a 10-bay refrigerated truck custom-made for the Good Shepherd Food Bank - rolls up, the Ogdens and their volunteers are ready to go. In short order, the truck’s doors swing open, food is unloaded and volunteers form an assembly line to fill banana boxes with food.

The Ogdens wave the first cars forward, calling out to volunteers the number of boxes to be loaded into each trunk. They chat easily and laugh often with the people in line, asking about their spouses and health troubles.

They know nearly everybody who drives up the hill by name.

“You have to treat anyone who comes to these programs with respect and dignity,” Dick Ogden says.

The Ogdens don’t stop moving throughout the distribution. Finally, as supplies dwindle and the last box is loaded into a waiting car, Dick Ogden reflects on the magnitude of giving away 12,000 pounds of food in 90 minutes.

“If more people could see something like this, maybe hearts would soften a bit,” he says. 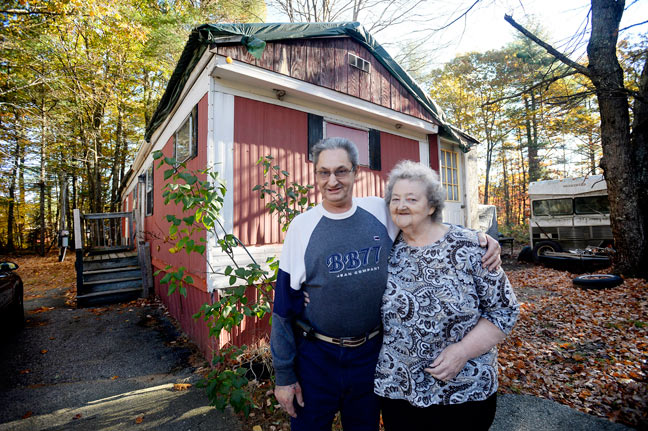 Across Maine, there's an increasing number of people like Jim and Nancy Pike of Alfred, seniors whose declining health and limited finances have put them among the so-called 'food insecure.' 'They are the hidden hungry … and they don't want anybody to know.' 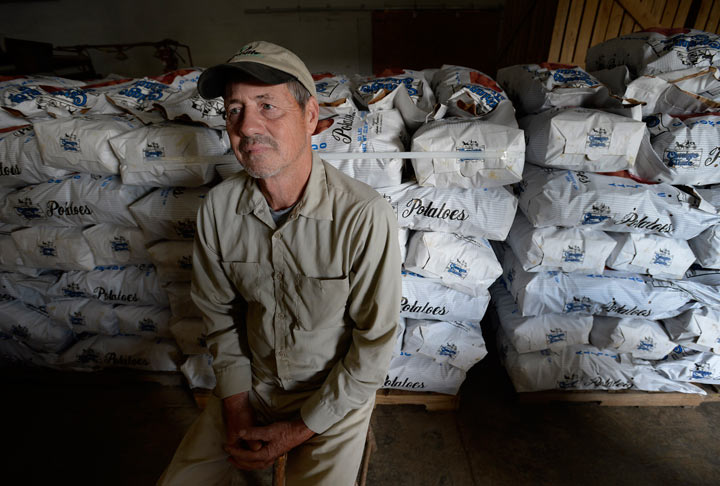 An oasis in a food desert

Even in the midst of Maine's most agricultural areas, seniors can find access to fresh produce limited. And that's where Friends of Aroostook steps in.