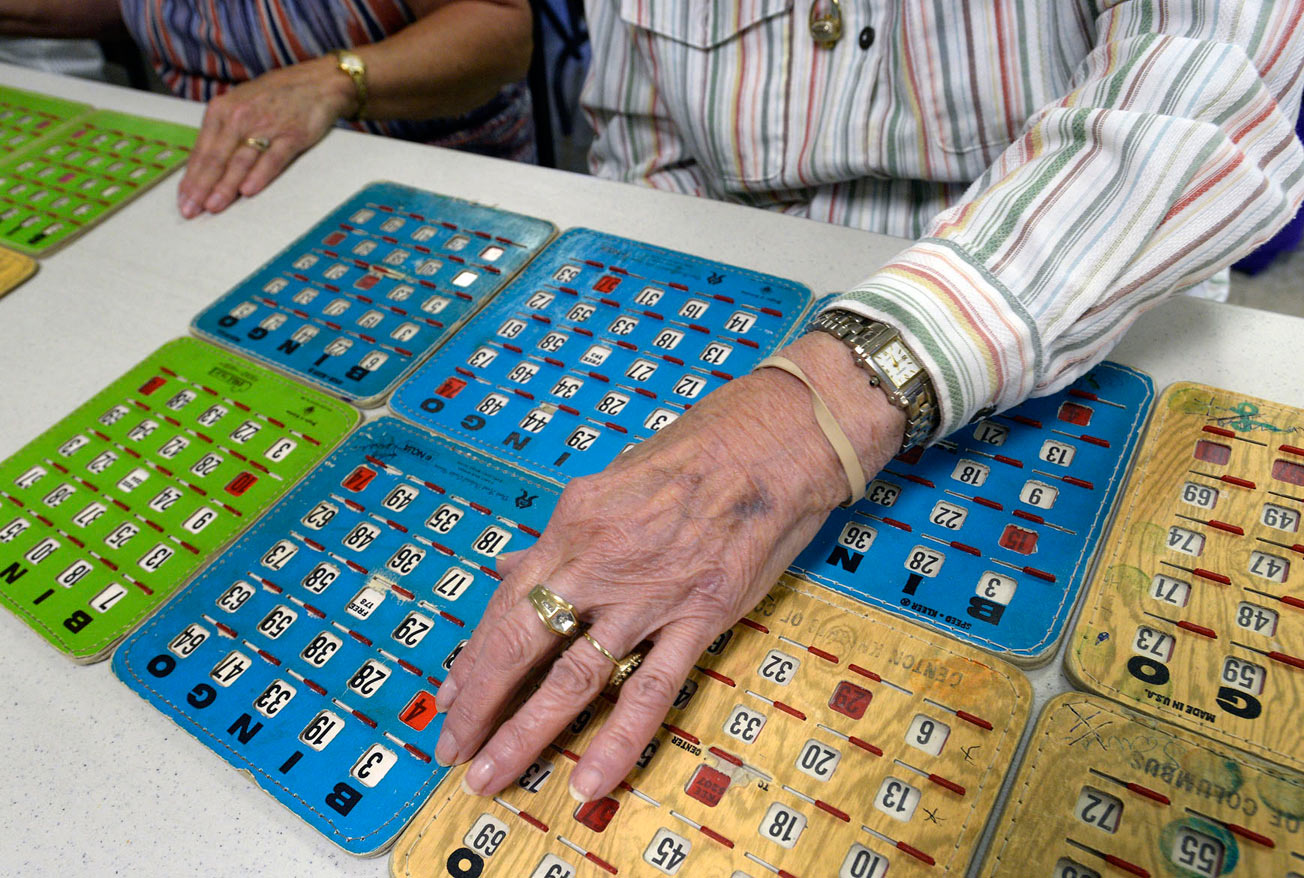 Laura Saucier 91, looks over her cards during a game of Bingo at the Eagle Lake Senior Center. “The first winner always gets the best pick,” said Saucier, who at 91 has the energy of someone decades younger. Shawn Patrick Ouellette / Staff Photographer

AGLE LAKE — The rolling rumble of plastic Ping-Pong balls and a simple “Are you ready?” were enough to silence the small but chatty crowd inside the Eagle Lake Senior Center.

A few players called out “Oui,” their hands already poised over their Bingo cards, ready to play and ready to win.

Everybody wants to be the first to pick out a prize from the spread at the front of the room. There, just below the Bingo board, are bags of apples and potatoes, vitamins, shampoo, paper towels, flour, sugar and boxes of cereal.

“The first winner always gets the best pick,” said Laura Saucier, who at 91 has the energy of someone decades younger.

Today everyone seems to have their eye on the bags of apples, flour and sugar.

These prizes are practical ones for a town with an older population, no grocery store and no Meals on Wheels or other food distribution program. For the seniors who play twice every week, it is a way to get some of the food they need without making the 30-minute drive to Fort Kent and the closest full-size grocery store.

“I try to get at least some fresh fruits and vegetables each week so they have something to look forward to,” said Mary Blair, who organizes the games. “Besides this, there’s really nothing going on in town.”

In Eagle Lake, a blink-and-you-miss-it town in Aroostook County, there are few organized activities for the 800 residents, half of whom speak French. Nearly 30 percent of them are 65 or older, making it “a senior citizen town,” Saucier said. 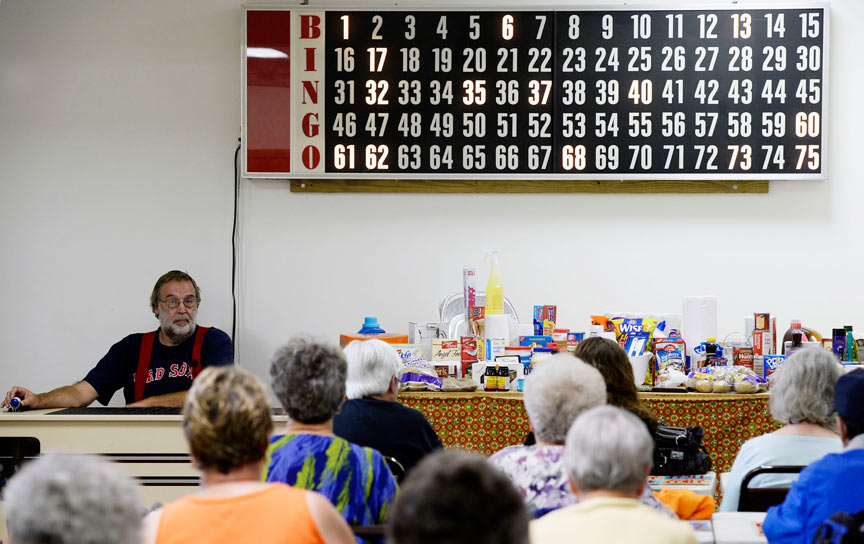 Caller Michael O'Brien calls out the numbers during a game of Bingo at the Eagle Lake Senior Center. 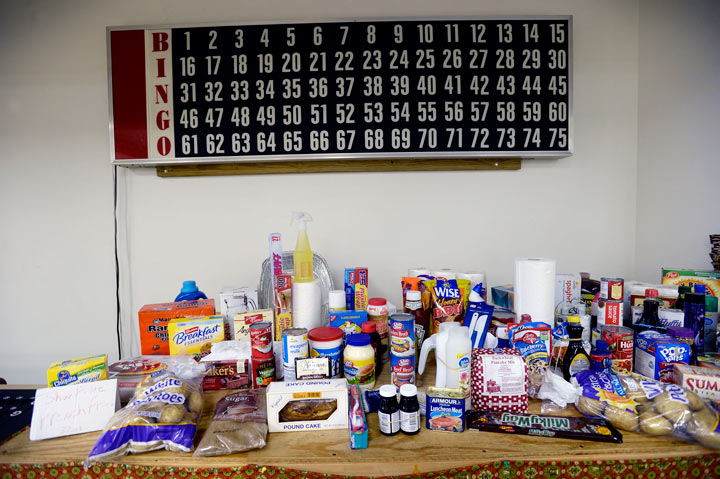 Prizes on display for the winners of Bingo games at the Eagle Lake Senior Center.

On a quiet morning in late August, this gathering of more than 30 senior citizens is the biggest – and probably only – assembly in town. Life for many, it seems, revolves around this senior center, built in 1989 to “provide services to the senior citizens,” according to a dedication plaque on the wall.

“This is all we get. Monday and Wednesday is Bingo,” said Rachel Martin, president of the senior center. “If they don’t go to church, they don’t get community.”

Because Eagle Lake has only one small store with a limited selection of food, most residents drive to Fort Kent, Presque Isle or Caribou to do their shopping. Those are long drives that become even longer – and sometimes impossible – during the snowy northern Maine winter.

Though surrounded by a county known for growing potatoes, broccoli and other crops, Eagle Lake is, by U.S. Department of Agriculture standards, a food desert. A rural food desert exists when a town is more than 10 miles from the nearest grocery store, making it difficult for residents to access affordable, fresh and healthful food.

There are more than 2.3 million Americans who live in rural food deserts, according to the USDA. Most of Aroostook and Washington counties are considered food deserts.

But food desert isn’t a term the seniors in Eagle Lake use when they talk about their hometown. Life can sometimes be hard, they say, but neighbors help each other whenever they can.

“If somebody needs help, there’s always a benefit going on,” Martin said. “People watch out for each other.” 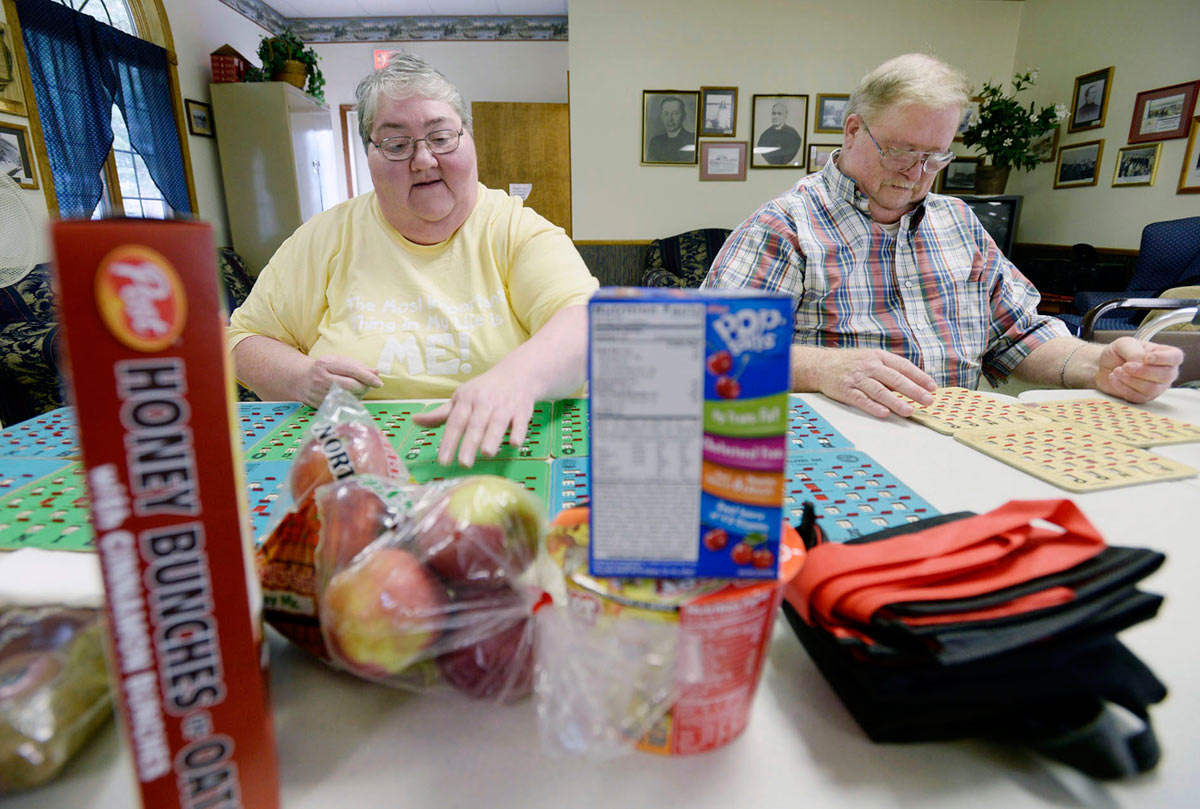 With their winnings on the table, Cheryl 67, and Charles Goggin 66, of Eagle Lake look over their cards during a game of Bingo at the Eagle Lake Senior Center. Prizes are mostly practical grocery items for the participants in this small town with an older population and no grocery store. The nearest full-sized grocery store is in Fort Kent, 30 miles away. Shawn Patrick Ouellette / Staff Photographer

For Cheryl Goggin, 67, senior Bingo is a welcome chance to meet with her friends and win a few extra groceries in the process. She sat next to her husband, Charles, ready to flip the windows on her reusable Bingo cards as soon as the numbers were called. She plays the same cards in the same order each week.

Today, Goggin, who shops in Fort Kent and Presque Isle, is the first to win.

“I’m happy I got apples,” she said, returning to her table with a 2.5-pound bag. “We like the vegetables (Blair) has been bringing because they’re expensive up here.” 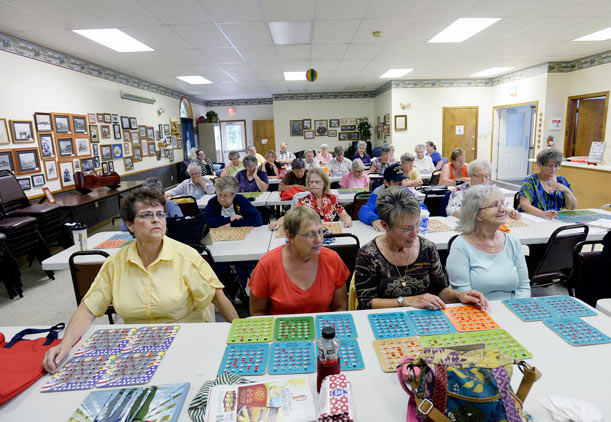 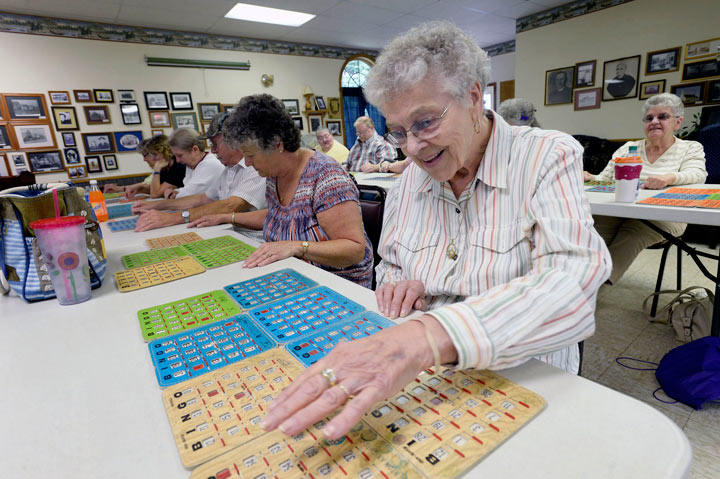 Laura Saucier 91, looks over her cards during a game of Bingo at the Eagle Lake Senior Center.

By the end of the Bingo games, the Goggins are big winners. Their haul includes the apples, a bowl of instant noodles, cereal, brown sugar, Pop-Tarts and pickles.

Saucier, who played Bingo with her daughter, Norma Soucy, chose her prizes based on what she knew she would use at home. She took a couple cans of evaporated milk and beef broth, and sent her daughter home with tissues and paper napkins.

Saucier, who lives in neighboring Wallagrass, said the senior Bingo games are just one example of how seniors in the area band together to make it through long winters. Several times a year, they gather at the senior center for potluck dinners.

Meals on Wheels once operated in Eagle Lake, but that went away five years ago because of a lack of volunteers and funding. The Bingo players now worry about their homebound neighbors.

A group of local men, including Blair’s husband, Raymond, pitch in to fill the void by harvesting hundreds of pounds of vegetables with the Friends of Aroostook, a Houlton-based nonprofit farm program. They then bag and distribute the vegetables to the seniors in town.

Saucier said she was grateful this year to get a bag of string beans, potatoes and cabbage.

It all helps, she said, when you’re trying to keep your pantry stocked.

“We’re the only ones taking care of ourselves,” Saucier said. 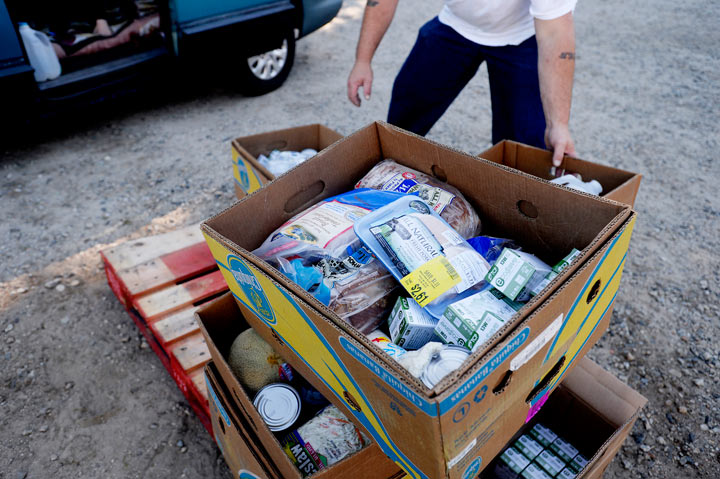